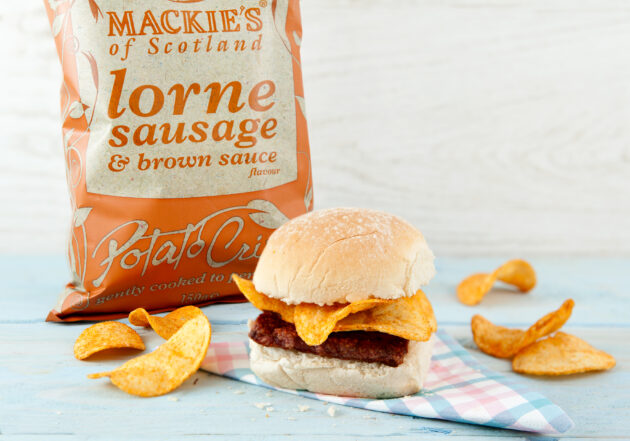 Not so square: Lorne sausage and brown sauce revealed as Mackie’s Crisps’ latest flavour now available in store at only £1 per bag.

A BELOVED breakfast and roll-filling staple is to be recreated in crisp form, as a proud Scottish brand launches its latest “world-first” limited edition flavour.

“Lorne sausage and brown sauce” will become the latest special launch from Mackie’s Crisps, when it hits the shelves in the coming weeks throughout Scotland.

Just 150,000 150g bags will be made, with the creation following on from Mackie’s previous special flavour and world-first, “haggis, neeps and tatties” launched last December and which sold out ahead of all expectations.

While the new flavour is being hailed by Mackie’s as a clear and obvious summer successor to the Burns-inspired creation, they expect fans to be divided over whether it should have been called square sausage, rather than the more “refined”, Lorne sausage.

James Taylor, from the Perthshire based family business, said: “We trialled quite a few different concepts, but the lorne sausage and brown sauce combination became an instant hit with all of our team.

“It really does taste just like the real thing – regardless whether you call it lorne or square.

“The addition of brown sauce gives it a really savoury and complex flavour profile – and one we hope crisp – and sausage – fans will love in equal measure.

“We’re quickly becoming synonymous for our patriotic limited flavours, but with good reason too. As Scots, we’re too quick to put down our traditional foods, but in reality we have amazing produce and dishes we should be fiercely proud of.”

It is believed that the Lorne or square sausage, as we know it, developed in the 19th century as improvements to metal making allowed for foods to be easily shaped or baked.

While the origin of the “Lorne” name is disputed, evidence suggests it is not named after Glasgow comedian Tommy Lorne, who made disparaging remarks about the quality of sausages in the city.

The most likely explanation is that it was named after the ancient district of Lorne (now part of Argyll and Bute) or The Marquess of Lorne, who was famous in the 19th century for marrying Princess Louise, the fourth daughter of Queen Victoria.

Nowadays, Lorne sausage is most often enjoyed in a breakfast roll, where its convenient shape allows it to be easily paired with other items and often includes brown or red sauce.

James added: “It will hit the shops throughout Scotland in the coming weeks and will only be available until the first – and only – batch of 150,000 bags sells out.

“We certainly hope that this new flavour proves as tempting as haggis, neeps and tatties did.

“We have enjoyed working on the development of this new flavour and limited editions will likely continue to play an integral role for our crisps business over the coming years.

“Those that prove popular amongst our customers could end up being added to our permanent range.”

James is the fourth generation to work at the Taylor farm – and is Commercial Director at Mackie’s at Taypack, which produces Mackie’s Crisps. He helps to run the family-owned business with his father, Managing Director George Taylor.

The crisps brand and Mackie’s at Taypack as a business were launched in 2009 as the result of a joint-venture between potato farmers the Taylor family and Aberdeenshire’s Mackie’s of Scotland, which is renowned for its ice cream and chocolate.

Its thick-cut and gently cooked potato crisps use the best varieties of crisping potatoes, grown on the farm, reflective of its “plough to pack” ethos.

It hopes to confirm all the stockists in the coming days. Following strong interest it will be readily available throughout Scotland